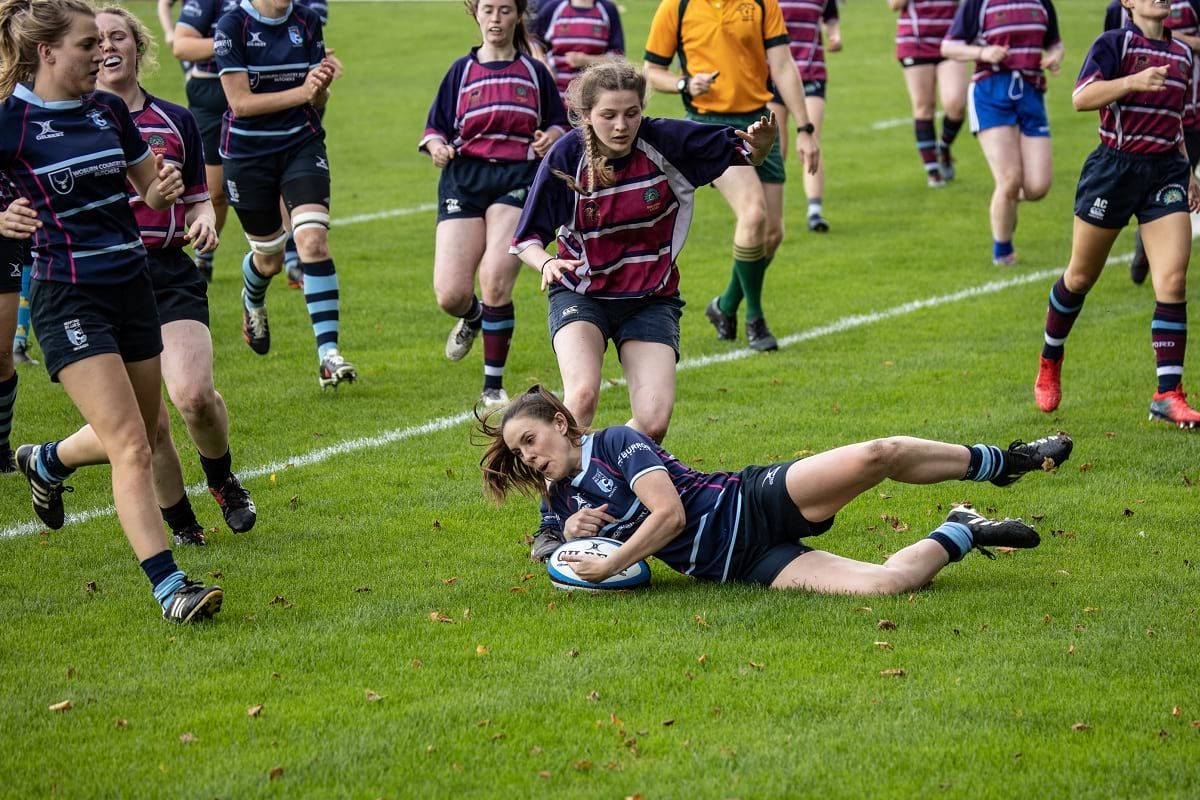 Bedford Blues Women enjoyed a victorious start to their NC3 Midlands (Central) Division campaign with a resounding 31-0 victory over Shelford Ladies Nomads on a historic afternoon at Goldington Road.

Tied 0-0 at the break, Blues Women were uncontainable in the second-half as they scored five superb team tries to mark their first ever league fixture in the perfect fashion.

Emma Graham and Ellen Walsh both scored twice, while Heidi Lawson also went over among joyous scenes at the home of Bedford’s premier sporting club, cheered on by around an estimated 400 members of the #BluesFamily.

There wasn’t too much to separate the sides at the break as Shelford didn’t let their numerical disadvantage – they started with 14 players – get them down as both sides showed great intent in and around the opposition 22s, although stern defence prevented anything troubling the scoreboard.

Uncontested scrums ensured a level playing field in their particular set-piece department, while Blues were immense at the line-out to steal multiple ball and thwart Shelford when they were in some exciting areas of the field.

It took just three minutes after the restart to get the first try as Blues again used the line-out to good effect. After peeling from the maul, scrum-half Abi Wilkins set off a passage of passes across the field which saw Graham write her name into the history books with the first ever competitive points scored by Bedford Blues Women.

Lucy Middleton – who kicked two of her three conversion attempts – nailed this first one for 7-0.

Blues were doing all the running as they penned Shelford inside their 22m, and it was just after the hour that Bedford got their second. It was pretty much a carbon copy of the first, only this time Walsh went over as the lead stretched to 12-0.

Just 60 seconds later, it was 19-0. Walsh grabbed her second with a stunning 60m drive to the line after intercepting a wide pass and putting the afterburners on to leave every Shelford player behind and dot down under the posts.

Blues stormed further ahead in the final five minutes. Again it was intuitive play in defence before spotting when to intercept and it left Lawson with the simplest of tasks to run unopposed to the line. This time Graham took the kicking responsibilities and made it 26-0.

Graham then rounded the scoring off with the last play in the game thanks to an evasive run past three defenders as Bedford Blues Women did the club and themselves proud in securing victory.

Well done to both teams who each made their own pieces of history on the day – Blues go to Wellingborough in their next fixture, on 14th November.