The transition from Youth to Adult rugby in the Bedford area has until recently been unstructured, causing a

significant drop out of players who never reach the adult game.  Through the combined efforts of  Bedford Blues, Bedford Junior Blues and Bedford Athletic there is now a structured pathway from Youth to Adult rugby for players of all abilities.

Colts (U18) level and build a natural pathway for them to continue rugby in Bedford.  We want players to see it as the norm for natural progression into either the Bedford Blues Academy or Bedford Athletic teams irrespective of their level of ability. Hence the dual branding of “Bedford Blues Athletic”.

levels.  We now have plenty of examples of players progressing from Bedford Junior Blues to adult rugby at a variety of levels and this structure is proven to work.

A good proportion of the senior age group Colts have progressed to join the Bedford Athletic senior teams in preseason training.

The Colts will be registered for the following competitions, mainly played on Saturday afternoons:

In working closely with the Bedford Blues Academy and Bedford Athletic, the clubs ensure that there is a clear

pathway for players to continue their rugby career locally in Bedfordshire for as long as they wish. 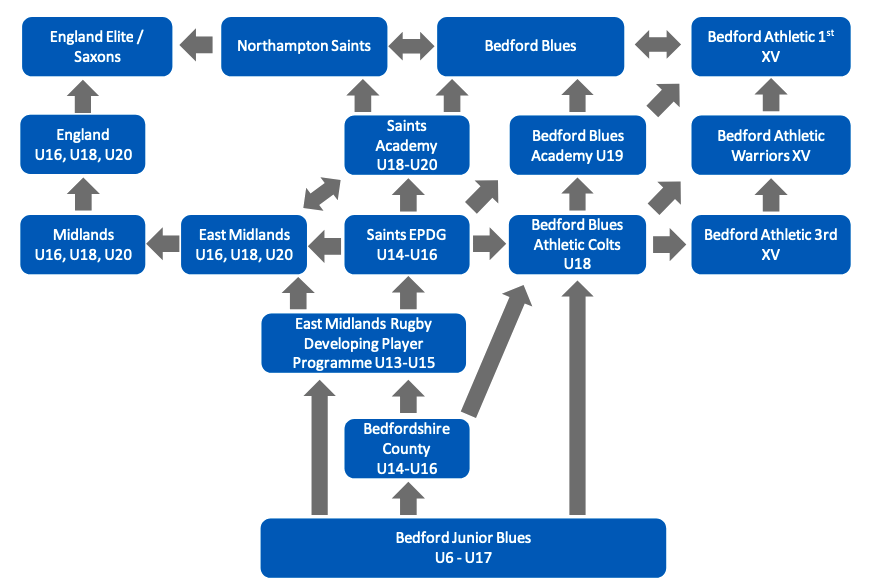 Some of our squad have the opportunity to be put forward to be considered for the Bedford Blues Academy as early as July each year.   However, this is on the clear understanding that they will be expected to train once a week with the Blues Academy and once a week with the Colts.   These players will play their rugby fixtures with the Colts, unless in exceptional circumstances a different approach is agreed between Bedford Blues Ath Colts and the Bedford Academy. Any player not put forward during their first  year  will  have  the  same opportunity again the following year.

If selected to join the Bedford Blues Academy, we have agreed with Bedford Blues that any “Colts” players will still be able to play for our current structure and will be made available for Colts fixtures.

Similarly, a transparent relationship is in place with Bedford Athletic whereby  that  whilst  there  may  be occasions when some of our squad will represent the Ath, this is on the understanding that it does not clash with the Colts fixtures.

Given the above, you can see that by the time all players have finished their last season with the Colts, they will have the opportunity to go on to either represent the Blues Academy or the Ath at senior level. Agreements have also been reached whereby any player who is released from the Blues Academy will find a natural home at the Ath if they wish.

For those players who leave Bedford to continue their education elsewhere, arrangements are in place for them to maintain contact with a “home” club and play fixtures, i.e. 3rd  team Ath when they are back home on breaks from University etc.

Our overriding objective is to keep 16, 17 & 18 year olds playing Rugby in Bedford at what is notoriously a difficult age with lots of fall out. We feel that by creating the right environment with a good balance of “fun” and a natural clearly explained Pathway will help retain players into adult Rugby.