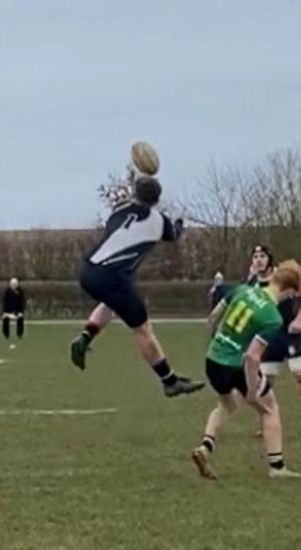 Bedford Colts visited Huntingdon Colts on Saturday. For a pleasant change compared to recent weeks, the weather was dry although the wind we have become used to was cutting across the pitch.

With a number of lads playing out of position due to current injuries, this was to be a good test of our squad abilities.

Both teams started well but it was Bedford who opened the scoring with a fine individual try from Eddie Brand who swerved through a number of defenders to cross the line 12 minutes into the game. For the next 20 minutes or so, it was a great contest for possession and territory, with both teams staking a claim to the ball.

After several minutes of very solid defence by Bedford camped on their own line, it was Huntingdon to score next. A converted try by them with 30 minutes played levelled the game up at 7 points each. Bedford responded quickly within 3 minutes by a great offload to Will Wood who charged his way over the line. Within 1 minute of the restart Bedford secured their third try of the half, with probably the try of the match. Prop Lewis Brown (pictured) leaping to take the restart then proceeded to make a strong run, gaining hard yards through the middle of the park. Bedford retained possession throughout a series of phases and some great support work to keep the ball alive. It was very appropriate that Brown was on hand to finish off the phases he had started in our own 22. Then just before half time, a set play from a scrum within 10 meters of the Huntingdon line and great hands from our backs saw Jack Darlow score in the corner. Half time score 28-7 to Bedford.

Following the break it was Huntingdon to score next 10 minutes into the second half, bringing the score to 28-14.
This was probably the fuel that Bedford needed to up their intensity and control possession. Three more well worked tries by Bedford by Eddie Brand (his second for the day), Filip Nawrocki, having a cracking game, thoroughly deserved his try after bashing through a number of defenders in what has become familiar style of late. The last try of the game came from Lewis Rendall (the codeine he had been taking for his tooth, now beginning to wear off) who was on hand to finish another great charge from Nawrocki, dodge through the defence and score under the posts.

There were some outstanding performances from any number of Bedford players today, but worthy of significant mention must go to Callum Daly who, despite swirling wind kicked every conversion today from wherever they were taken. It didn’t ever look like he was going to miss, and he didn’t.

Well done lads, we retain our position at the top of the league.